February, 2018, we readied the Pilots’ Discretion for sea, which included, among other things, the boys assisting Gaza (a dear friend and our ‘go to guy’ in St. Lucia  for a wide array of boat projects) polishing the Eisenglass. They did such an amazing  job, when they were done, the Eisenglass looked brand new! Additionally, we finished upgrading our inverter/battery chargers, serviced our main engines and genset and made one final run to Mega Massey to provision the boat.

A few days prior to departing St. Lucia, Ronan and I encountered a famous St. Lucian Soca/Gospel singer, Denver Pierre,  filming a music video at Rodney Bay Marina, where our boat was. He asked Ronan to be in the video. In the final video Ronan is shown 19 seconds in & again at 1:58.

It is a positive message themed song and video and it also shows a lot of nice video footage out and about in St. Lucia.

The day we departed St. Lucia was bitter sweet for us. In addition to the melancholy feelings associated with leaving an island where we had spent a significant amount of time and made many friends, it also marked the day that Patton would have turned 16. After setting out to sea, we had a moment of silent memorial and paid tribute to the greatest boat dog there ever was.

Our first stop on our northern course was in Fort de France, Martinique. We had been there several times in prior cruising seasons, and had written about our experiences after those visits. See Dominica, Martinique & St. Lucia (2015/06/04). Martinique was fortunate to have escaped the brundt of the wrath of Irma and Maria. While we did see some minor damage (missing roofs on some structures in the fort), overall, the small metropolitan city seemed as beautiful as ever.

We were pleased to see that the renovations on the central cathedral, which was covered in scaffolding during our last visit, were completed. The results were magnificent. 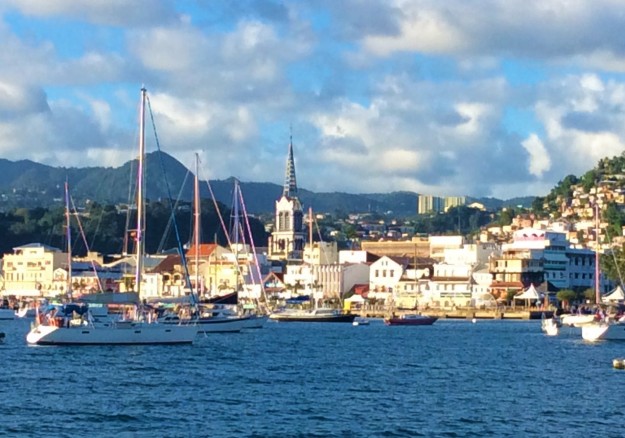 With cruise ship season in full swing, it was no surprise that, the day we pulled in to port, there was a cruise ship picking up passengers and getting underway herself. 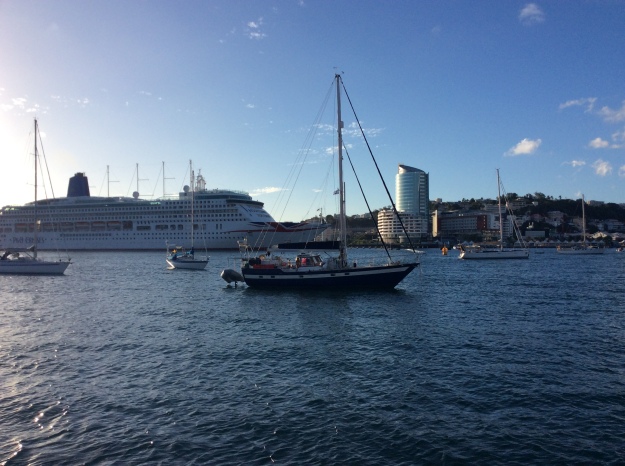 Our next port of call on our northward bound journey was Dominica.

Ronan, Ryan & Randy at the helm

Unlike Martinique, Dominica was hit hard this past hurricane season.  When we arrived, six month’s after the hurricanes, the damage to the landscape and structures was still readily apparent.

Equally apparent was the strength and resolve of the people to carry on and move forward. Tourism and agriculture are the two main resources in Dominica. While the island continues to work towards recovering the agricultural resources, tourism was abundant. In Portsmouth harbor, the Portsmouth Association of Yacht Services (PAYS) was up and running, guiding boats to mooring balls and offering other yacht services. 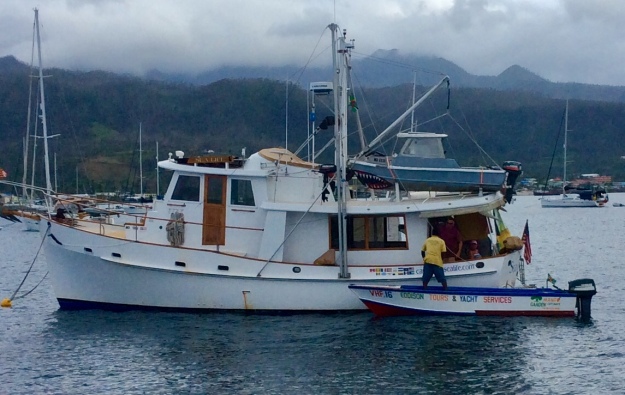 The mooring balls and lines all looked new and the harbor was as full as we have ever seen it. The VHF was full of chatter from yachtsmen arranging river and rainforest tours. Once again, with cruise ship season in full swing, we saw a sailing cruise ship in the harbor ferrying passengers to and from the island. She was a beautiful sight to see, sails up, departing at sunset, just off our stern. 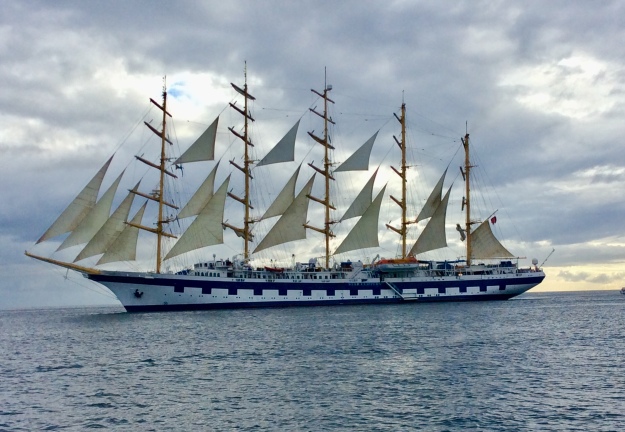 We refueled in Rivière Sens, at the southern end of Guadeloupe, before continuing north to Deshaies. 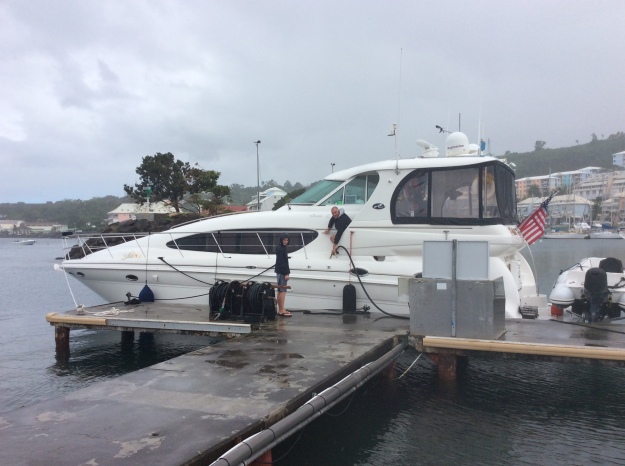 We pulled into Deshaies to the sight of yet another sailing cruise ship.

Deshaies seemed to have fewer mooring balls available than we had seen on previous visits, so we dropped our anchor and settled in for yet another fabulous Caribbean sunset.

View from the galley, Deshaies, Guadeloupe (2018) 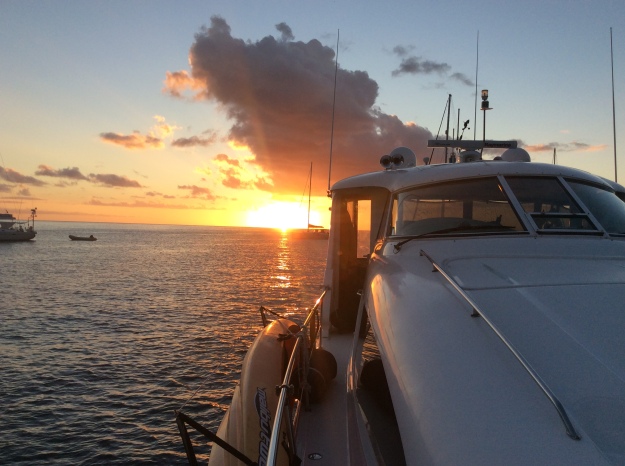 In Deshaies, boats come by to “take your morning order,” and the next morning, we had fresh baguettes delivered right to our boat.

Ryan picking up baguettes delivery to the boat, Deshaies, Guadeloupe (2018)

In sum, it seems this past year’s hurricanes have not dampened the cruise ship / cruisers / tourism enthusiasm in the Easterrn Caribbean. In fact, we spoke to many who said they were purposesfully visiting hurricane hit island nations because tourism dollars are needed to assist in the speedier recovery of the islands. We will not sugar coat it, there have been significant physical and economic consequences for the Eastern Caribbean islands but for the most part these islands and their people have proven resilient and will thrive again.

In our next series of posts we will be reporting on what we found on some of the islands that had a more direct encounter with Irma or Maria or both.

Hurricane season has arrived in full force. As cruisers, we spend an inordinate amount of time monitoring weather systems. The latest shows Hurricane Maria intensified into a catastrophic Category 5 storm Monday, with maximum sustained winds of 160 mph (260 kph), as it surged toward islands in the eastern Caribbean.

A tropical storm warning was issued for Antigua and Barbuda, Saba, St. Eustatius, St. Maarten, St. Lucia (where Pilots’ Discretion is currently located), Martinique and Anguilla. Many of these islands are still recovering from direct hits from hurricane Irma. (See http://www.msn.com/en-us/weather/topstories/cat-5-hurricane-maria-threatens-storm-battered-caribbean/ar-AAs6sKy?ocid=spartandhp.) We are continuing to keep all those affected in our thoughts and prayers. We will post additional updates after this storm passes. 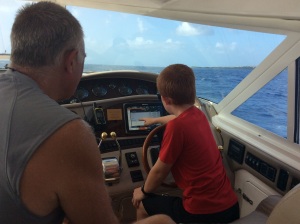 We had a great time in St. Lucia, we got a lot accomplished and look forward to returning in the future. Unfortunately, the various delays that we encountered in St. Lucia, waiting on parts and technicians left us with our scheduling backs against the wall. We had plans for meeting our good friends Mike Cleary, Bridget Finnegan, and Mike’s daughter Madison in the BVIs. They had a Sunsail sailboat chartered in Tortola beginning on February 19, so when we literally dropped the solar panel technician on the fuel dock in St. Lucia on the morning of February 13th, we knew we had some serious real estate to cover to be 350 miles north in just six days. During our dash north we cruised through the territorial waters of St. Lucia, Martinique, Dominica, Montserrat, Guadeloupe, St. Kitts, Nevis, Statia, St. Marteen and finally the British Virgin Islands. Wow, I am tired just writing about it.

Cruising past the active volcano in Montserrat

Ryan & Patton at the helm

Cruising past the active volcano in Montserrat

R&R hoisting the courtesy flag in St. Eustatia in front of the Quill volcano 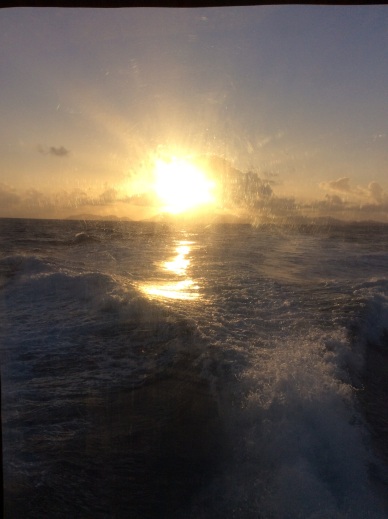 Most of the trip was run in seas of 4-6 ft, with a few periods of 8-9 ft, and even a day with the Caribbean Sea as smooth as a small mountain lake. Our speed averaged 8-10 knots but when we had the opportunity, we ran as high as 25 knots to keep the scenery moving. We have visited all of the countries we just mentioned during our trip south last year so although we are disappointed that we had to hustle through these countries to meet our friends, it was worth it to get to be in the BVI with friends that are virtually like family to us. 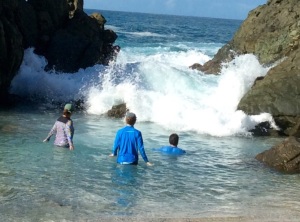 Once in the BVI we began our trip by heading off to the Bight on Norman island. A mandatory stop at the infamous Willie T floating bar and grill was followed by a trip to Gorda Sound, Virgin Gorda, and Jost Van Dyke. 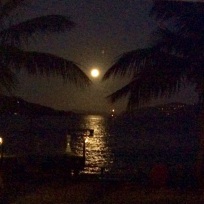 Madison picking up the mooring

We followed that up with a two day trip to Anegada, then over to Marina Cay and The Baths. 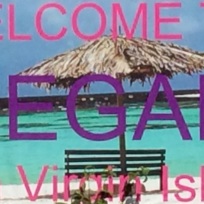 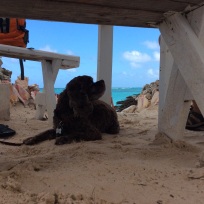 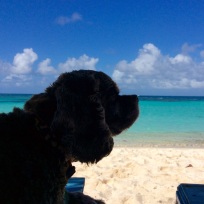 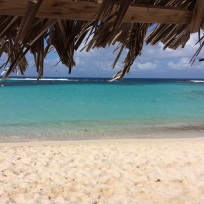 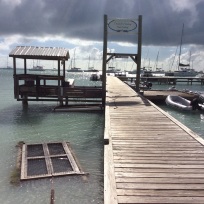 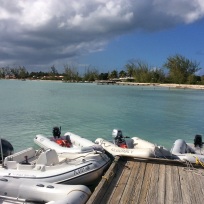 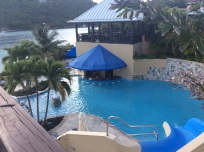 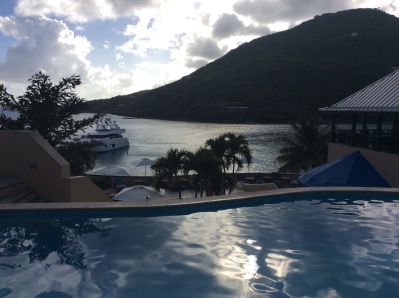 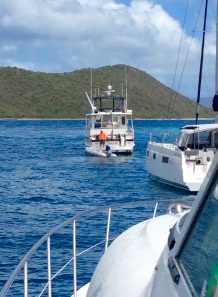 After that whirlwind, we capped the Cleary clan’s trip to the BVI by meeting our cruising friends Jeff and Izzy Rogers for an evening of good food, conversation and music in one of our favorite spots in the BVI, Cane Garden Bay.

Our friends have gone home and it is time for our adventure to continue. It occurs to me that this nomad lifestyle works well for our family. I have an idea, I think we should keep this trip going. We will discuss it at dinner tonight and I will get back to you. For now, keep following our progress as our  life adventure continues … 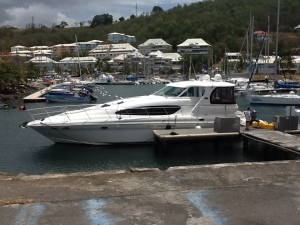 After departing Guadeloupe, we proceeded south to the island nation of Dominica. With under two weeks to go before our insurance induced requirement to be in Grenada, we are not getting to spend as much time as we would like in each of these enchanted islands. We will spend more time exploring on our return trip north after hurricane season. With that said, we did get to spend a wonderful evening anchored in Prince Rupert Bay on the northwest coast of Dominica. There is a professional organization in the town of Portsmouth known as PAYS (Portsmouth Association for Yacht Security) that provides everything from taxi and laundry services to divers, guides and nighttime anchorage security for visiting yachts. The night that we arrived we were greeted by several PAYS boat boys who invited us to a beachfront barbeque for visiting boats. There were probably fifty yachts at anchor in the harbor. Dominica is a large volcanic island with rivers, mountains and rainforests and we really look forward to exploring it more completely in the future but for now, one night was all we had and at daybreak we were underway to our next country of Martinique. 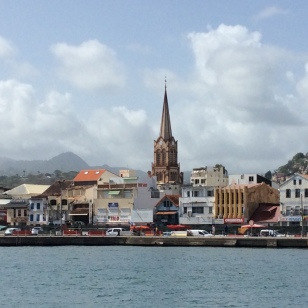 Our stop in Martinique took place in the captial city of Ft. de France. Ft de France is probably the most cosmopolitan city in the Caribbean, with elements of both ancient and modern architecture. A beautiful waterfront city that is heavily geared towards the maritime industry. Martinique is a colony of France and as such it has a highly developed infrastucture complete with government built dinghy docks, excellent roads and parks and almost anything a visiting yacht could need within easy reach.

The afternoon that we arrived there were about 10 boats anchored in front of the town dock at the base of the 17th Century French Fort. We enjoyed dinner aboard and marvelled at the good fortune to have found such a picturesque and tranquil anchorage.

The next day our tranquility was abruptly interrupted when approximately 90 sailing catamarans arrived in our anchorage. It turns out that they were part of a trans Caribbean rally and they were all in a serious partying mode. Most of the sailors were well qualified and did a good job of securing their boats in the anchorage. That said, given the sheer number of boats, we still got to spend most of the afternoon fending off boats that were dragging their anchor or had just gotten too close to us and would swing into our anchoring arc creating a hazard for both themselves and the Pilot’s Discretion. 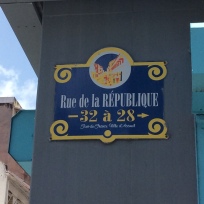 Happily, it was time for us to move on and our next stop will surely go down as one of my favorites. We headed south for St Lucia with the intention of spending the night in the sheltered bay at Marigot. The weather was perfect for our passage to St. Lucia and when we were abeam Marigot Bay we elected to continue on to the Southern tip of St Lucia so that we could anchor in the shadow of the Pitons. The Pitons are two dramatic volcanic peaks that are some of the most photographed geographical features in the Caribbean. The bay in front of them has a half dozen mooring balls (anchoring is both prohibited by statute and operationally impractical). We picked up a mooring ball about 50 yards offshore in front of the 5 star resort known as the Jalousie Plantation. Given our close proximity to shore we could not believe the depth of the deep blue water. Our three independent depth sounders confirmed we were in 984′ of water.

The image of the Pilots’ Discretion moored in front of the Pitons was really one of those pinch me moments when we were all amazed by the amazing experience that is our journey.