The cruisers’ forums have been reporting that in the six months since  St. Martin took a direct hit from Category 5 Hurricane Irma, recovery efforts have been, not surprisingly, slow and arduous. Countless wrecks had to be removed from the navigatable waters and docks needed to be repaired and/or replaced. Repairs to the marine infrastructure were secondary to repairs to individuals’ homes, businesses and land infrastructure. With all of that in mind, we approached the island trepidatiously and with an eye towards assisting in the recovery efforts.

We had heard through the coconut telegraph that Fort Louis Marina, in Marigot Bay, had partially reopened. We had enjoyed our stays there previously in 2015 and 2016 [see St. Martin (2015) and St. Martin (2016)], so we were glad to learn that they had survived the storm. We contacted the marina in advance of our arrival to determine what marine services were available. They informed us that fuel, water, electric and floating docs were all available. We spent the first night in St. Martin on the hook in Marigot Bay, astonishinly, one of only a few boats in the entire bay.

We picked up fuel in the marina first thing the next morning and then tied up to a floating dock. The dock staff were fantastic, setting up brand new / movable cleats exactly where we needed them to hold the boat.

After securing the boat, we headed towards the office to clear immigration  & customs, and to check in to the marina. It was then that we got our first glimpses of the devastation that Irma had bestowed upon the island. Six months after the hurricane had past, one might justly have concluded that it had just blown through the day before. As boaters, it was hard for us to look upon vessels, sunken in their slips. 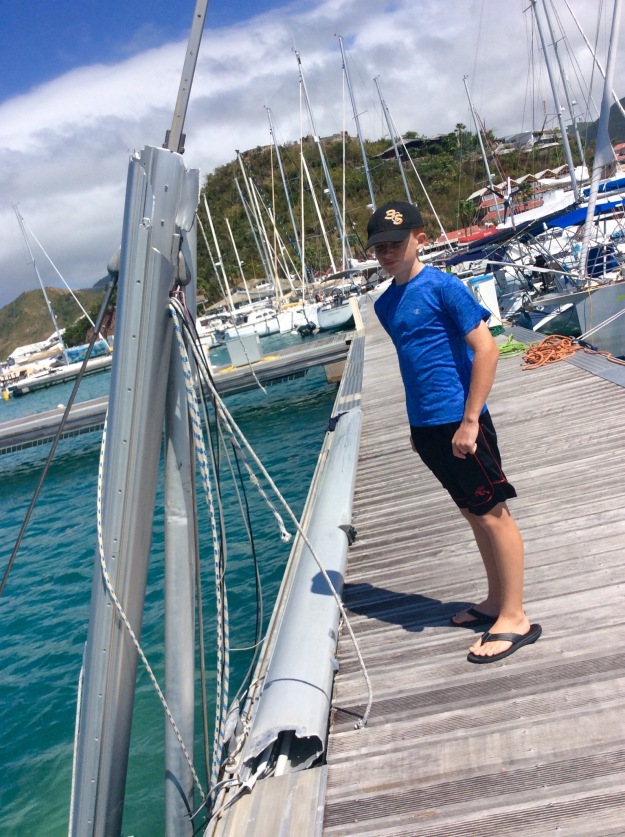 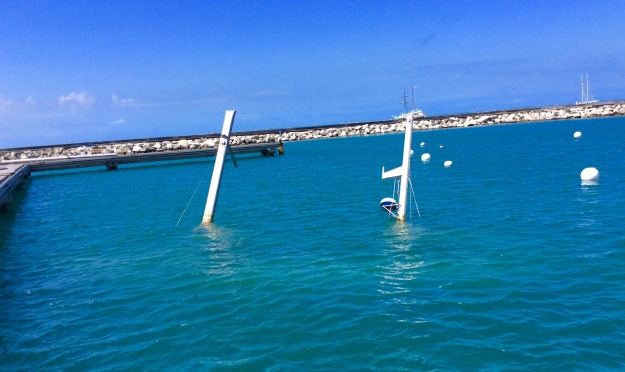 Half of the marina was closed as the docks and water and electric pedestals were in complete disrepair.

It was both evident and comforting to see that efforts were being made to repair the docks, including rewiring the electric. 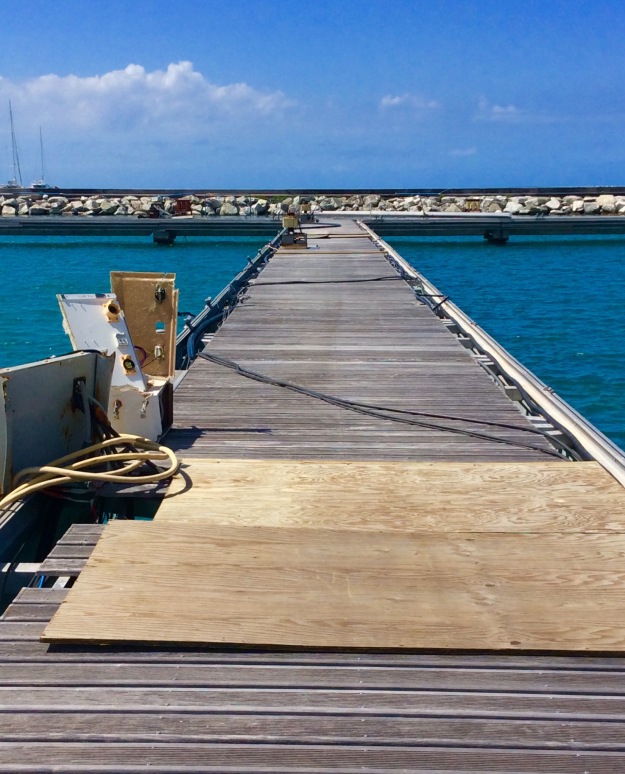 Looking past more sunken boats and mangled docks, we saw hotels that were still without roofs and windows.

The old Fort Louis Marina office, had not yet reopened, because it, too, suffered the wrath of Irma. We were told the windows blew out and the wind and water destroyed everything in side.

The new office and the immigration & customs clearing-in computer have been relocated to the building directly accross the street from the marina.

Once outside, we saw more remnants of Irma. Streetlights and signs were bent over and concrete sidewalks were torn up. There was hardly a car in the parking lot that did not show some sign of hurricane damage.

Random boat debris and road or sidewalk hazards were roped off with caution tape. A disconnected center console hardtop (with seats and rear fridge) on the sidewalk was an unusual sight. However, the backdrop of the beautiful yachts in the water, directly behind the still visible signs of Irma’s destructive powers, showed clear signs that the marine community is recovering.

Many of the European candelabra style streetlights just outside the marina were damaged. LED floodlights atop the poles provided adequate interim lighting.

After clearing in, we strolled around the area. The Saint Martin Yacht Club, just outside and to the left of the marina, was open. While it suffered some damage to its glass balcony, it is a great waterfront spot for a waterside sundowner or a meal. 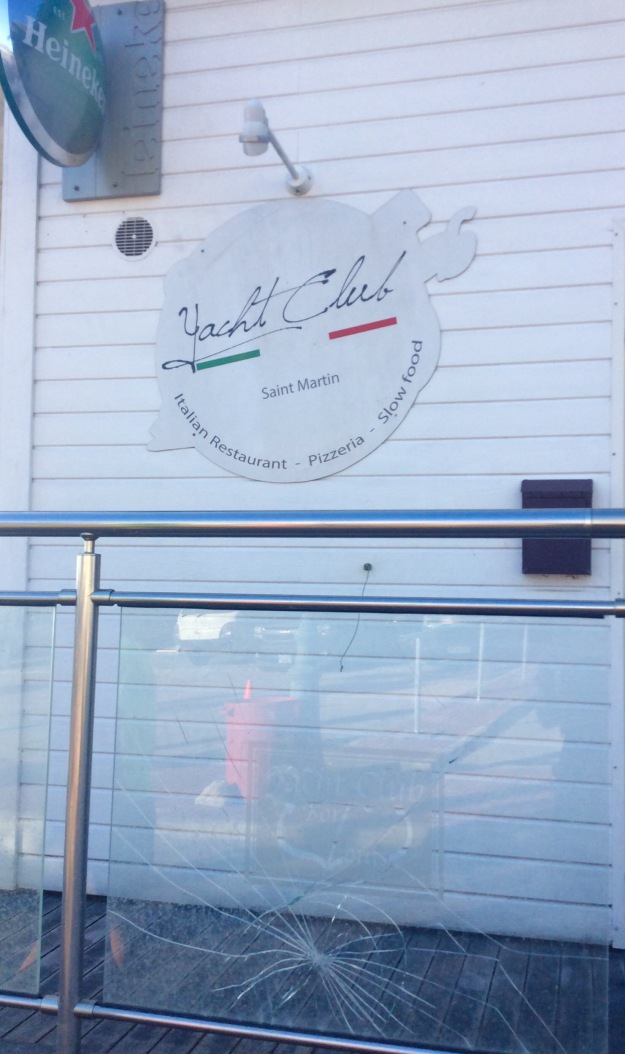 While walking along the waterfront, we saw more than the usual amount of Iguanas. Perhaps there homes, too, were disrupted by the storms. 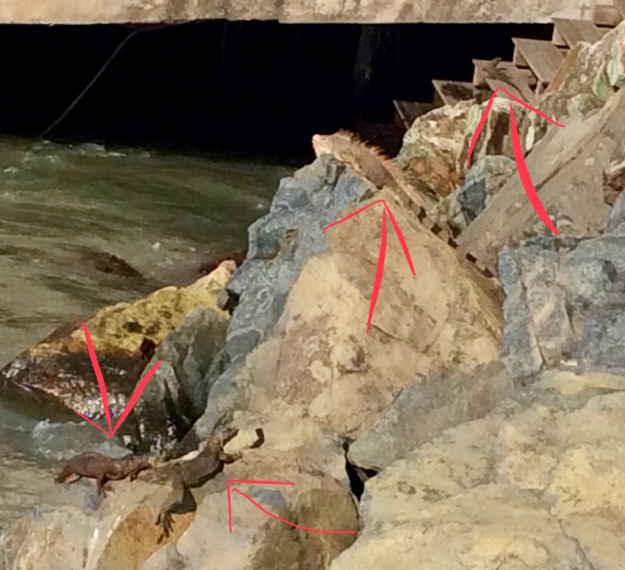 A short walk outside, and to the right, of the marina, we found the West Indies Shopping Mall open for business. 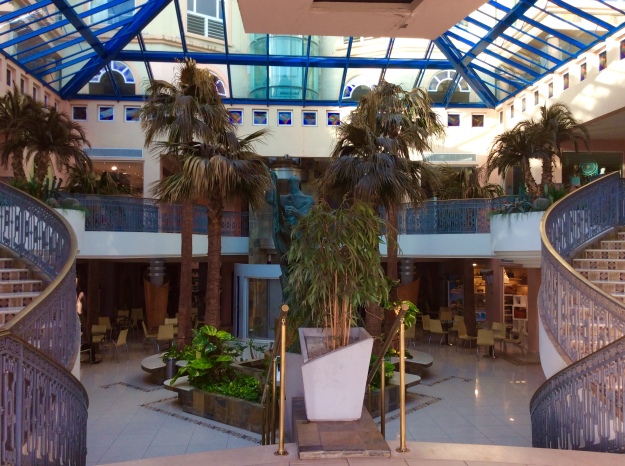 Down by the ferry docks, people were taking pictures in front of the infamaous “I love SXM” sign. The ferries to Anguilla and St. Bart were running on schedule and most of the restaurants in the square by the ferry docs were open.

The fort always provided stunning views of the marina and Marigot Bay below. The views were still stunning, however, the cautionary tape at the eroded precipice was yet another sign of the damage Irma left behind.

Looking out from the fort, we saw many blue tarps providing shelter to those structures still without roofs. 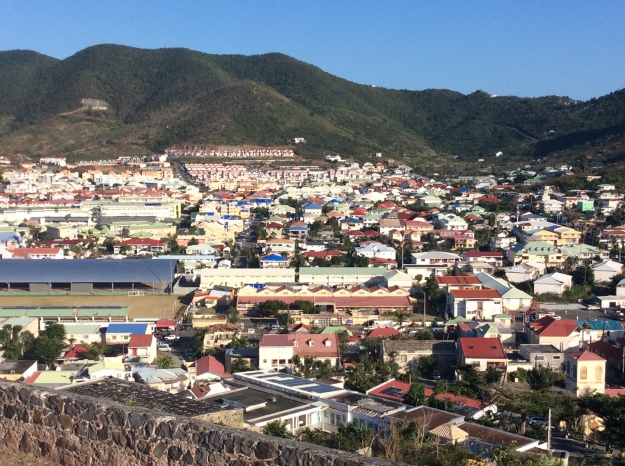 The most stunning view was that of Marigot bay. The lack of vessels in the bay below was a stark juxtaposition to our previous visits to Marigot Bay and a strong signal that the level of marine tourism in St. Martin has declined precipitously. 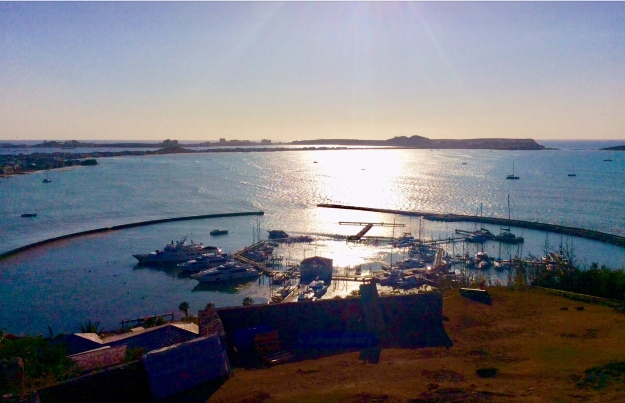 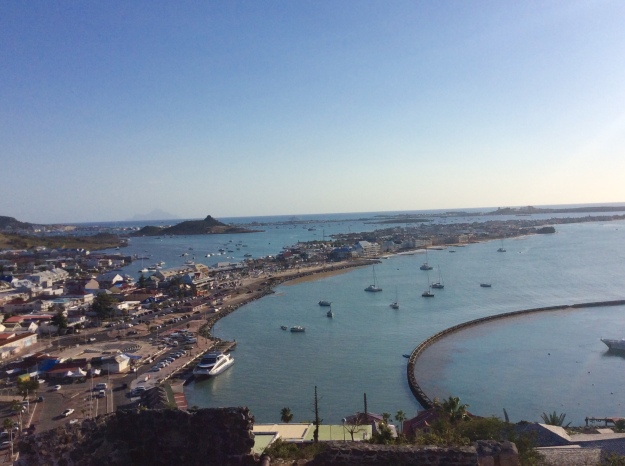 We did not travel outside of Marigot Bay, as we have on previous visits [see St. Martin (2015) and St. Martin (2016)], so we cannot report on how the rest of the island is faring. What we can say is, what we saw in Marigot Bay was the strength and resolve of the people to rebuild their beautiful island. Everyone we met was warm, friendly and inviting. In sum, St. Martin is still a beautiful cruising destination.

Our next port of call, The British Virgin Islands (BVIs), also took a direct hit from Hurricane Irma. More on what we encountered in the BVIs in our next post.