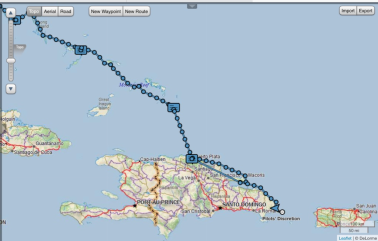 Northern coastline of the Dominican Republic

We left Ocean World before dawn on February 4. As the sun rose, we were underway, enjoying our morning coffee as the light revealed a truly amazing coastline off our starboard beam. The Dominican mountains come to the waters edge, terminating in sheer cliffs that the Atlantic breakers continuously pummel in a spectacular display of natures might. It was quite awe inspiring being able to watch from the comfort of the Pilots’ Discretion as we cruised a couple of miles offshore.

Once around Cabo Samana, we entered the calm waters of Samana Bay which is a very large, protected bay on the east coast of the D.R. We pulled into Marina Puerto Bahia de Samana for fuel and a couple nights rest. We have been very surprised by the quality of the marine facilities that we have found in a country that in many areas lacks the basic necessities of life. The marina infrastructure is second to none and in many cases, far nicer than most marinas that you would find in Florida or other boating centers in the United States. 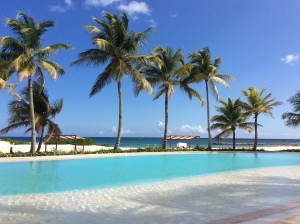 While in Samana we took the opportunity to hire a couple of very hard working “boat boys” to wash the Pilots’ Discretion and polish her stainless steel. We also had a diver clean the hull and running gear in preparation for our crossing of the Mona Passage.

On February 6th, we were once again underway at dawn, this time we were leaving in company with six sailboats who were all going in the same general direction as us. The sight of the sailboats off our beam and stern as the sun rose was really beautiful and reminded us why we love our time at sea so much.

It wasn’t long after departure that it became evident that we would not be running in company with our new sailing friends for long. We were operating at our slowest idle speed and it was clear that we were still pulling away from the gaggle of sailboats. As we watched the sailboats disappear off our stern, we set up for a 10 knot cruise and made the turn southeast to round Cabo Engano and make our way to Punta Cana.

Whale breaching the surface just off our port side

About an hour into our day we began to see what this area is famous for; dozens of migrating humpback whales were visable all around us. Some we could only see the moisture rising as they were breathing through their blowholes off in the distance but on a few occasions, a whale would breach the surface and put on a show within a few hundred yards of the Pilots’ Discretion. In the words of the boys, “that was awesome!”

The videos of the whales do not come close to capturing the magnificence of the spectacle that they provided us; it truly was one of those “you had to be there” moments.

We are going to spend a few days here in Cap Cana as we attend to some routine maintenance items before heading off for Puerto Rico. The good news for  us is that Frank Castillo, the Cap Cana Marina Dockmaster has gone way out of his way to help us in any way that he can as we prepare for the next leg of our journey. We will post next from Puerto Rico.

4 thoughts on “The North Coast of the Dominican Republic, Samana and Punta Cana – by Randy”